COURSE ON COMMERCIAL SEXUAL EXPLOITATION OF CHILDREN AND ADOLESCENTS IN PERU 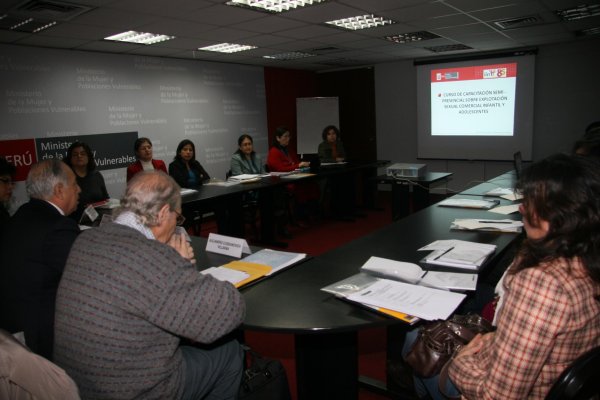 Under the “Inter-American Program for the Prevention and Eradication of Commercial Sexual Exploitation, Smuggling of and Illicit Traffic of Children and Adolescents”, in its component of human resources training, the IIN carries out annually a semi-face course on the thematic with the joint responsibility of the Member States that wish to join our training proposal.

In its 2012 edition, there were participants from Chile, Ecuador, El Salvador, Peru and Uruguay.

The first stage of the course, online and implemented by the IIN, was held between April 26 and June 30. Then, each State organized the second stage, face to face, according to the local interests, needs and possibilities.

On September 6, the Ministry of Women and Vulnerable Populations (MIMP, in Spanish), opened the face to face stage that will be held during the month of September at its headquarters.

The Vice-Minister of Vulnerable Populations of the MIMP, Julio Rojas Julca, urged participants to work jointly to address this problem, with particular attention to the situation of children and adolescents with disabilities, as part of the most vulnerable populations.

The IIN wish you success in this activity.